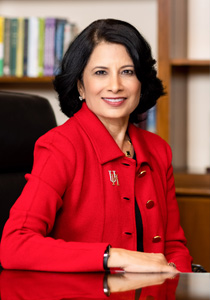 During her first decade of leadership, Renu Khator guided the remarkable transformation of the University of Houston into a top-tier institution that has become nationally recognized for its unique blend of academic accomplishment, research innovation, athletic achievement and dedication to the success of a significantly diverse, determined student body.

Today, UH enjoys an enrollment of more than 47,000 students, awards nearly 11,000 degrees annually, offers more than 275 undergraduate and graduate academic programs and has a $6.4 billion economic impact on the Greater Houston area each year.

Since arriving at UH, Khator has concentrated on making sure the University reinforces the economic and cultural strengths of the city of Houston. To that end, UH has focused on energy, the arts and health care while maintaining an overall pursuit of excellence in the higher education arena. Recognizing that a great city deserves a great public university, Khator launched an ambitious program shortly after her arrival to elevate UH‘s standing in the academic community. In 2011, in approximately half the predicted time, UH earned Tier One status for highest research activity from the Carnegie Foundation.

That unprecedented success has been followed by a string of similar achievements, including the opening of Houston’s first medical school in more than 40 years, being awarded a Phi Beta Kappa honor society chapter, more than tripling the number of National Academy members on the faculty, dramatically improving the graduation rates and the recent launch of a bold strategic plan to become a top 50 public university.

Under her guidance, the University consistently earns accolades for its students’ achievements, such as Princeton Review’s “50 Colleges That Create Futures” and “Best Value Colleges.” It also ranks 39th in the nation on U.S. News & World Report’s 2022 social mobility index ranking and among the top 100 universities in the world for utility patents.

Reflecting her keen appreciation of the importance and complexity of college athletics, UH Athletics has experienced historic milestones under Khator’s leadership. New training facilities and venues have been launched including the Fertitta Center, the Guy V. Lewis Basketball Training Complex and the Houston Baseball Player Development Center. Most impressively, the Cougars consistently compete at the highest levels, earning conference championships, bowl game invitations and NCAA Final Four appearances. In 2021, UH accepted an invitation to join the Big 12 Conference — a hard-fought mission of Khator’s to join a Power Five conference.

She has been named to the American Academy of Arts and Sciences and has served on numerous boards, including Federal Reserve Bank of Dallas, TIAA-CREF, NCAA, American Council on Education, Association of American Colleges and Universities, and the Greater Houston Partnership. Additionally, she has been an advisor and on committees and councils for several Indian prime ministers. Her alma mater has bestowed an honorary doctorate degree upon her, as has Swansea University. She has been named Houstonian of the year, inducted into the Texas Women’s Hall of Fame and, in 2014, Indian President Pranab Mukherjee presented her with the Pravasi Bharatiya Samman Award, the highest distinction bestowed upon a non-resident Indian.

Born in Uttar Pradesh, India, Khator came to the United States to study at age 18 and earned a master’s degree and Ph.D. in political science from Purdue University. Prior to her appointment at UH, she was provost and senior vice president at the University of South Florida. She is married to Suresh Khator, associate dean of UH Cullen College of Engineering, and they have two daughters who practice ophthalmology, and three grandchildren. 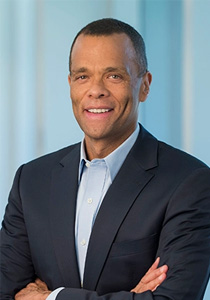 As a leader with deep expertise in implementing strategies that change conditions in communities of all types, Gaskin provides the vision, strategic thinking, and thought leadership to scale and deepen the impact of the Foundation’s comprehensive entrepreneurship portfolio, which aims to eliminate systemic barriers and enhance economic activity through inclusive entrepreneurship. With deep experience in organizational management in a variety of settings, he is also responsible for the department’s strategic planning, talent acquisition, program execution, grants process, budgeting, and operations. Charged with leading the team of more than 30 associates, Gaskin uses his collective life and work experiences to inspire each associate to achieve extraordinary things, reach their full potential, and impact the lives of those the Foundation serves.

Prior to joining the Kauffman Foundation, Gaskin was chief operating officer for Impact Hub in the U.S., where he led organization-wide initiatives to develop and scale a social innovation marketplace to support entrepreneurs and impact investors to build sustainable businesses that drive long-term social and environmental change. He served as lead partner to Impact Hub’s global association to promote interorganizational alignment, shape global business strategy, and advance strategic efforts in developing regions of the world – including Africa and Latin America.